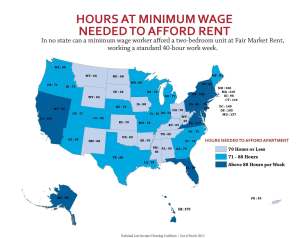 Over the last couple of days, this image has made its way across the Internet via Facebook, Tumblr, Digg, and other sites. It’s a simple map showing how many hours per week a minimum wage-worker in every state, plus Washington, D.C. and Puerto Rico, would need to work in order to afford the rent and utilities on a modest two-bedroom apartment in their state.

This map comes from Out of Reach 2012: America’s Forgotten Housing Crisis. We release Out of Reach every year to document the disparity between what workers can afford to pay for the rent, and what is available to working renters in the private market.

It comes as no surprise to most people that a worker making minimum wage would have a difficult time being able to afford the rent. After all, minimum wage is, by definition, the lowest wage people in just about every profession can make. What makes this graphic shocking, however, is just how far out of reach the rent is in so many place. In Hawaii,  a minimum wage worker must work 175 hours a week, 52 weeks a year to afford the rent. In Utah, it’s 77 hours per week, 52 weeks per year. Even in the most affordable place on the map, Puerto Rico, a worker cannot afford rent and utilities on a modest apartment working less than 55 hours per week, 52 weeks a year.

It’s also important to know that according to the Bureau of Labor Statistics, the average wage earner in the U.S. works 34.5 hours per week as of January 2012. Again, this isn’t always by choice; many of those workers who have not been laid off have seen their hours cut back.

In the end, it comes down to what HUD Secretary Shaun Donovan wrote in the preface of our report: “For decades, having a decent, safe place to call home has been a cornerstone of opportunity in America- a place where we can raise our families, connect to our communities, and pursue better opportunities for ourselves and our children.” What our minimum wage map shows is that having a decent, safe place to call home is no longer a given for working people in America. We believe that isn’t the way it should be, and that there are concrete steps that can be taken to make affordable housing possible for all Americans again.

12 thoughts on “Talk of the Town: Making the Rent”