Over-the-Rhine Community Housing (OTRCH) , the owner and manager of a low income housing site in the gentrifying Over-the-Rhine section of Cincinnati, was nominated for NLIHC’s 2017 Organizing Award for their impressive organizing and mobilization efforts, preventing the demolition of a neighborhood park and community public space.

OTRCH has a history of mobilizing the Cincinnati community. Since the 2006 merger of two local housing justice organizations, they have developed over 300 units of affordable housing, have managed over 400 units, and have saved 45 historical buildings from demolition. Over-the-Rhine is a diverse community that has experienced a dramatic loss of affordable housing while also experiencing a dramatic increase in up-scale housing. Neighborhood residents felt excluded from attempts at progress in the area and wanted stability.

In early 2015, OTRCH, its neighborhood Community Council and other residents learned of a plan working its way through the city to sell off 84,000 square feet of public land to a private developer for the purposes of constructing  21 high-end single family homes, in the otherwise dense, low income and mostly black and brown neighborhood. The plan included the demolition of current community assets—a public park and basketball courts where neighborhood kids play, and a community garden maintained by a neighborhood-based nonprofit—with no public input process with residents who would be deeply affected. OTRCH’s Children’s Creative Corner, the Greater Cincinnati Homeless Coalition and Peaslee Neighborhood Center’s Agents of Change program together created their Keep Our Courts/Do Development Differently (KOC/DDD) campaign to convince city officials to abandon their proposed privatization and development plan, and to institute notions of equity and justice in future development efforts. 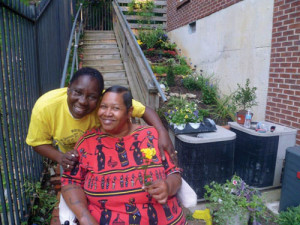 The campaign earned the support of other organizations and movements, including the city’s chapter of Black Lives Matter. Activities of the campaign included public education and mobilization components; a neighborhood cookout, kid’s basketball tournament and block party at the public park and proposed development site; lobby visits with numerous public officials; and testimony before the city council by advocates, residents, and children who would be impacted by the demolition of their neighborhood park. KOC/DDD was successful in pressuring the City of Cincinnati to re-examine the terms of its exclusive development contract with the private, for-profit developer; as a result, the developer opted not to renew this contract. The city is now working to improve community input processes for more inclusive community preservation and development proposals in the future.