Harvard sociologist and MacArthur Genius Dr. Matthew Desmond discussed his critically acclaimed book, Evicted: Poverty and Profit in the American City, to an audience of housing advocates and others committed to ending housing poverty at an event sponsored by the National Low Income Housing Coalition, the Coalition on Human Needs, and the National Housing Conference hosted on April 28, 2016. Published in March of 2016, Evicted became an immediate bestseller and has lifted the national rental housing crisis and the reality of housing poverty into the national spotlight. The event was designed to connect Dr. Desmond’s groundbreaking scholarship with larger discussions regarding housing policy. The Ford Foundation sponsored the event.

Dr. Desmond dedicated his address, which drew large number of attendees both in person and over livestream, to explaining the scourge of evictions and the broader rental housing crisis in the U.S. He wove together the story of one family who experienced a cycle of evictions in Milwaukee with compelling statistics on the plight of low-income families nationwide. Dr. Desmond met Arleen, a mother of two boys, while he lived in a trailer home and later in a boarding house in the lowest-income areas of Milwaukee.  The story of Arleen and her children was a heart-rending account of how small mistakes can lead to an eviction and how a first eviction can prevent a family from finding a new place to rent because of the stigma of eviction records.  Mr. Desmond interspersed his discussion of the effect of eviction on Arleen and her sons with research reminding his audience of the pervasive reality of housing poverty.

If Arlene’s experience gave Dr. Desmond’s statistical analyses of housing poverty a human face, his discussion of the high rate of black women in Milwaukee who have faced eviction—20%—and the rising costs of housing and eviction rates nationwide showed how common Arleen’s experience is.   Dr. Desmond noted that in Milwaukee alone, there are forty evictions every day.

Dr. Desmond stated that eviction contributes to poverty, instability, and joblessness. He said that his most important message was: “Eviction is a cause, not just a condition, of poverty.”  But Dr. Desmond also emphasized that eviction is not inevitable.  The cycle of eviction and housing instability is, he said, a result of deliberate policy choices. “We already have a housing assistance program in this country,” Mr. Desmond said, referring to the mortgage interest deduction. “It’s just not a program for low income people. It predominately benefits the wealthy.” Dr. Desmond concluded: “There is no moral code, or ethical principle, or piece of legislation, or piece of scripture, or holy teaching that can be summoned to defend what we’ve allowed to happen to the least among us” before advocating for policies designed to expand affordable housing. 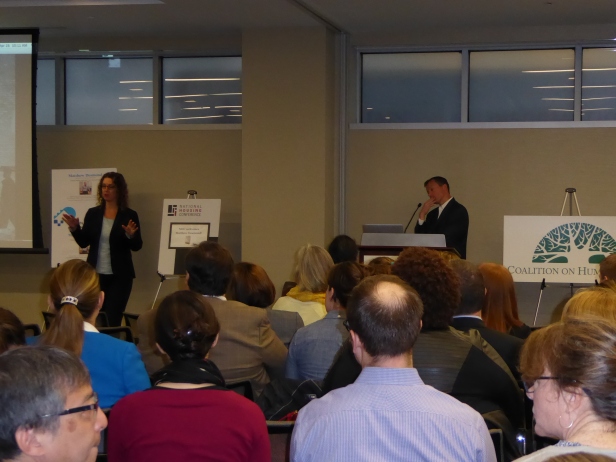 Throughout his presentation, Dr. Desmond acknowledged the presence of many affordable housing policy experts in the audience. This depth of knowledge allowed for a vigorous discussion following Dr. Desmond’s remarks, first during the question and answer period and later on Twitter.  Attendees engaged Dr. Desmond on an array of questions ranging from how to make affordable housing a presidential campaign issue to how advocates can combat the use of nuisance complaints as cause for eviction, a practice that disproportionately effects victims of domestic violence and families with children.

Dr. Desmond continued the conversation on a Twitter chat using the hashtag #EvictedDC. Answering questions from Twitter users, Mr. Desmond tweeted: “If we care about homelessness, family, work, opportunity…then we should care about affordable housing;” “Affordable housing is central to human flourishing.  Fix that and we fix a lot;” “NHTF = Natl Housing Trust Fund = important solution to house poor families;” and much more.  In all, the Twitter chat with Mr. Desmond engaged 227 users and included 500 posts. The Twitter chat reached 422,075 users and created 2,026,580 impressions while the hashtag #EvictedDC trended on Twitter, which was a testament to the attention Evicted has brought to the critical issue of housing poverty.

To view a recording of the event, go to: http://bit.ly/1TARrXA