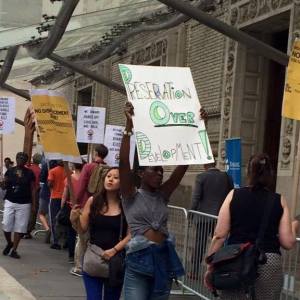 Residents of Brooklyn, NY, have been caught in a struggle against predatory developers for years. Neighborhoods have rallied to fight back against landlords pricing out low income tenants to make way for wealthier occupants. Equality for Flatbush is a neighborhood-level coalition devoted to preserving the character of Flatbush and to addressing the threat of displacement brought on by gentrification.

Equality for Flatbush organizes advocates door-to-door and block-by-block, and their efforts have shown the importance of organizing on housing issues at this very local level. Residents recently began a social media campaign with the slogan Before It’s Gone // Take It Back. The campaign is inspired by the Spike Lee film Do the Right Thing. Residents hold a sign or sticker with the phrase on it and take a selfie, use the hashtag, or share with their networks the ongoing struggle of being low income in Brooklyn, where affordable housing is disappearing by the block.

Before It’s Gone hosted a successful online fundraising campaign, gaining over $8000 to put towards translating materials, creating a resource library, and making a documentary. The organizers understand that accessibility is important when gaining traction for a cause, especially when working with multi-lingual and multi-national neighbors. Equality for Flatbush is skilled with social media activism, producing frequent new content for accounts on multiple platforms such as Twitter, Facebook, Tumblr, and Instagram. The combination of social media and neighborhood organizing results in a cross-generational campaign with diverse opinions and resources for outreach. 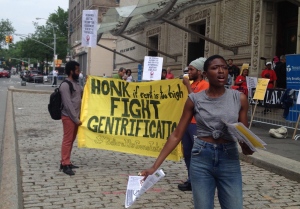 Equality for Flatbush’s activism reaches beyond the internet. They noticed that there were many other groups in their community fighting for the same causes, so they founded the Brooklyn Anti-Gentrification Network (BAN), a coalition that “fights to stop rampant corporate gentrification that is causing displacement of residents.” BAN includes organizations such as the Bushwick Housing Independence Project, Families United for Racial and Economic Equality, and the Movement to Protect the People. Their ten-point policy platform calls for an end to vacancy decontrol of rent-stabilized apartments, elimination of the 421a development tax break, the use of neighborhood-level area median incomes to establish the rent thresholds for what is considered “affordable,” among support for various other reforms. 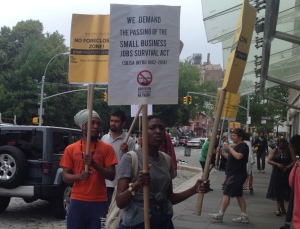 They have already started acting on some of these points. The 421-A tax break has been amended in a manner that bans “Poor Doors,” segregated entrances in mixed-income housing. This victory was a key point of BAN’s platform.

Equality for Flatbush, Before It’s Gone, and the Brooklyn Anti-Gentrification Network are excellent examples of communities coming together to fight for inclusive, responsible neighborhood growth. The anti-gentrification struggle is real in New York, and these local organizing efforts are showing that change can happen when informed and involved neighbors demand the issue is addressed.

Lela Schwartz is a senior at the University of California, Davis, studying International Relations with minors in Community Development and Human Rights. Lela has past experience performing community engagement projects in South Africa through study abroad, and upon completing her degree she hopes to work in refugees’ rights, housing, and protections.