After the Thursday release of the U.S. Census Bureau’s 2010 American Community Survey (ACS), local, state, and national news outlets were quick to release coverage on the data. And it’s no wonder why; the ACS data provide a stark look at economic distress among an ever growing number of renters nationwide. The ACS is an annual survey of three million households that provides the public with demographic, social, economic, and housing characteristics of the American population. After mining this data, our Research team discovered that while wages are stagnating, rental costs continue to rise and more renters nationwide are housing cost burdened.

(Housing cost burdened households spend more than 30% of their income on housing costs.)

You might have seen that our Research team took over our Twitter account last Friday, tweeting #ACSdata all day. They also wrote about some of the data for this week’s Memo to Members. One especially revealing piece of the ACS data are the ongoing difficulties renters’ nationwide struggle with to find affordable housing.

The rise in cost burdened renters can be traced to the loss of affordable units and the overall decline in rental units at lower price points. Although the availability of units renting for more than $1,000 a month rose by nearly 800,000 units, to 37% of the rental market, those renting for $500 or less shrunk to only 14% of the total number of units.

Our Research team also takes a deeper look at the problems with affordable housing and releases the resulting report every spring, Out of Reach. This annual report provides an estimated housing wage; a figure that represents the hourly wage needed to afford a modest apartment unit, on average, nationwide and in every state, metropolitan area and county in the county.  Reflecting the rising costs of rental housing in America, this past year the Housing Wage rose to $18.46 an hour.

“Our study of wages nationwide indicates that renters consistently come up short of the Housing Wage in reality. So, as rental costs continue to edge upwards, the number of housing cost burdened renters nationwide grows, as indicated by the 2010 ACS data.”

To cope with rising housing costs, renters must either find a second job, no easy feat in today’s economy, or spend an increasing proportion of their wages on housing.  In some high cost states, balancing over three full time minimum wage jobs would be required to afford Fair Market Rents. This Wall Street Journal infographic (based on Out of Reach data) shows how “as housing cost has risen, so has the number of jobs needed to afford to rent a two-bedroom home.” 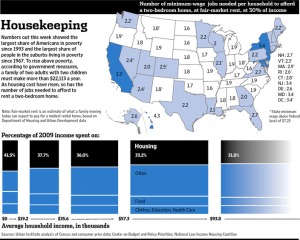 Has there been a particularly good article that you have read recently on the ACS data? Share any local stories that did a note-worthy job covering this housing problem that renters are struggling with across the country.